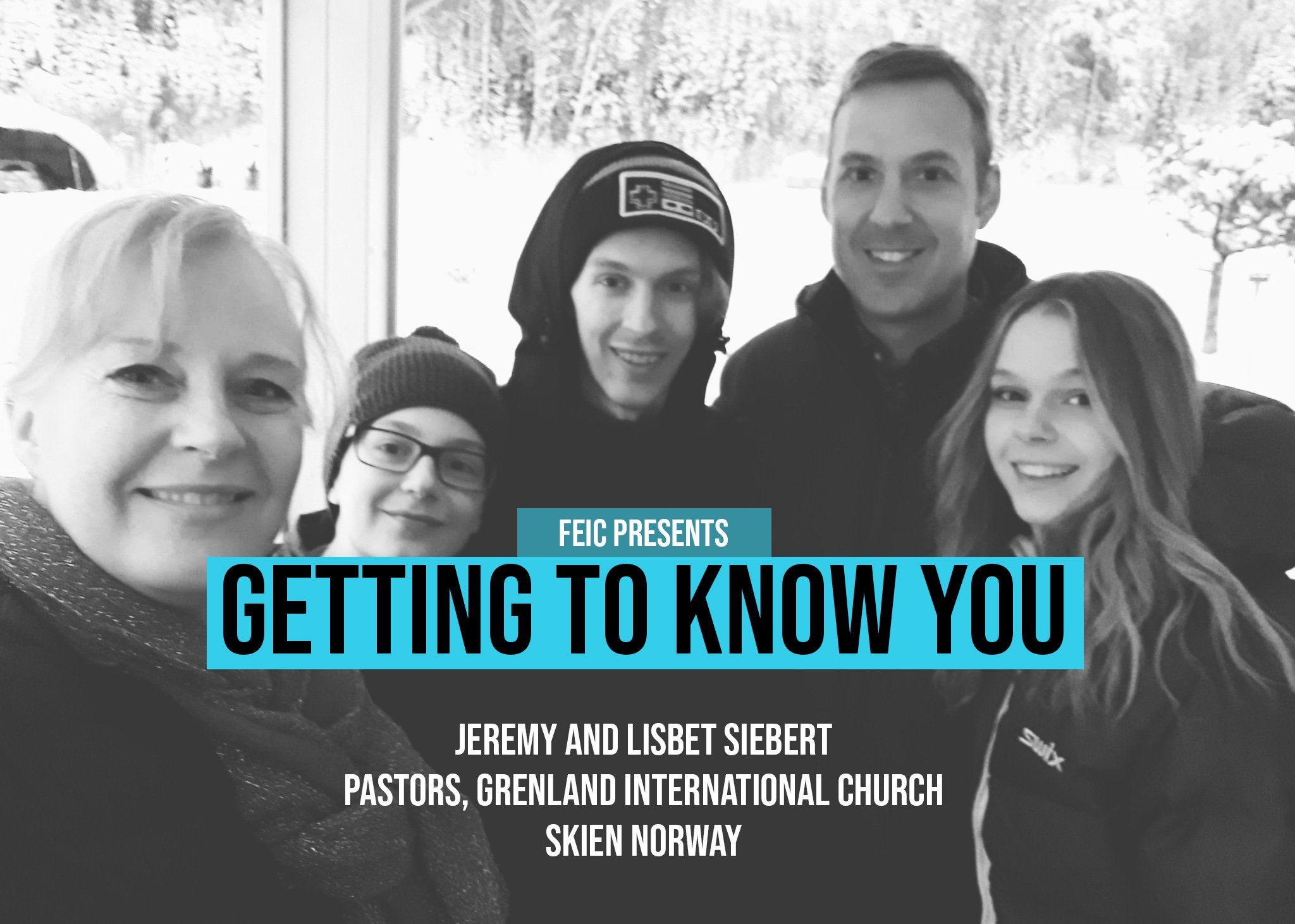 ‘Getting to Know You’ is a new series in which we’ll feature pastors of FEIC member churches.

In this article, we feature Jeremy and Lisbet Siebert who started Greenland International Church in Skien, Norway in November, 2021

Share with us a little about your life growing up.
I grew up in Washington State, on an island in the Puget Sound. I have 3 sisters and a brother. My twin sister and I are the youngest. I went to elementary, middle and high school on Whidbey Island. My growing up years were wonderful. We lived out in the country on a few acres. My first job was feeding my neighbors cows.

After high school I did a Discipleship Training School (DTS) with Youth with a Mission (YWAM). Feeling called to pastoral ministry, I studied Church Ministries at Northwest University where I graduated with a Bachelor’s Degree. Later on, I continued my education in Portland, Oregon, at Western Seminary where I received a Master of Arts in Biblical and Theological Studies.

How did you meet the Lord?
I grew up in a Christian home. Each Sunday my parents took me and my siblings to the local Assemblies of God church. I can never remember a day when I did not believe in Jesus.

Around 7th and 8th grade my friends began to make decisions that were not right, even though many of them had grown up in Christian homes. I found myself being pulled into a direction of compromise. While I believed in Christ, I wanted to be like the crowd.

During the summer between 8th and 9th grade my local youth group went to a Power Team Crusade. The Power Team were a group of very strong men who did all sorts of amazing demonstrations of strength. At the end of the evening they gave an altar call. While I believed in Christ, I wasn’t following Him as I should. I felt the Lord speak to my heart and tell me to choose who I would serve. So I got up and walked down to the altar and have never turned back. It was the greatest decision of my life.

My Christian faith didn’t start out easy. I went into High School having lost all my friends since I wasn’t making the same decisions they were. It was a lonely year, but God was faithful. Eventually He brought other friends across my path.God has been so good to me. 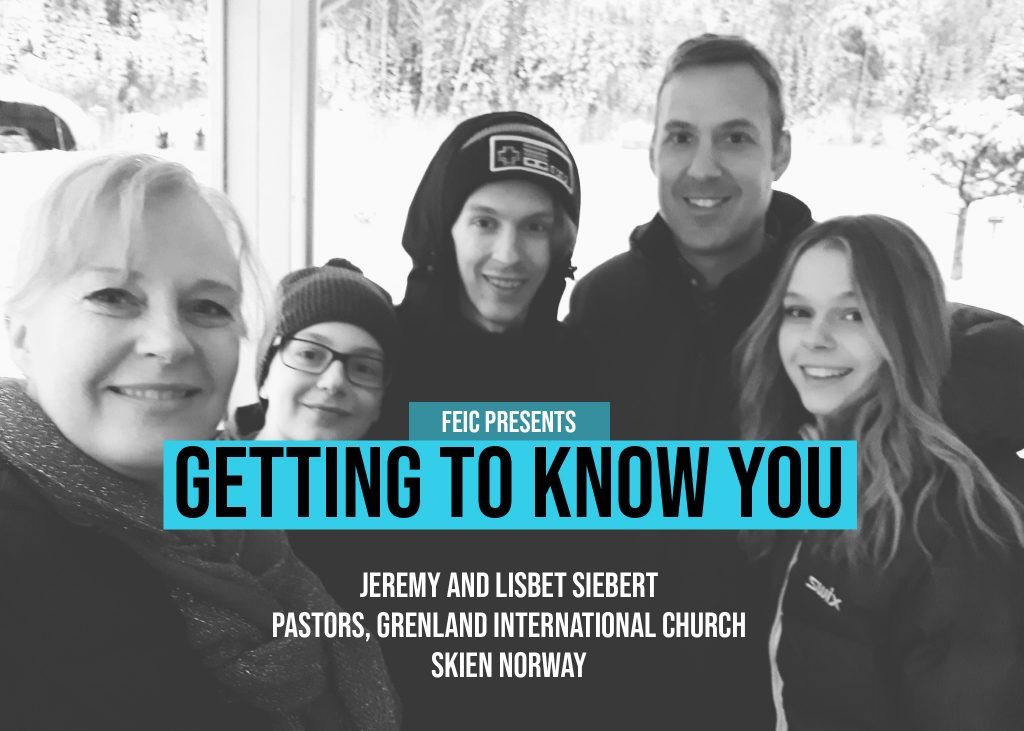 How did you meet Lisbet? Tell us about her and your children.
I met my wife Lisbet in 1996 in YWAM in Los Angeles. I came from Washington State and she came all the way from Norway. Lisbet went to Brazil for outreach and I went to Mexico.

After our DTS, Lisbet went back to Norway and I continued on as a summer short term staff. We continued communicating back and forth by sending letters and cassette tapes (yes, we are that old). The following year, in 1997, we were married in a bilingual wedding in Norway and I took my bride back to Washington where we began our ministry together as youth ministers.

Lisbet and I have three children. Our oldest son Jonathan was born in 2001 in Hawaii. He is gifted with computers. He truly is one of the kindest people I have ever known. Our daughter Lily was born in 2003 in Oregon. She is very social and loves to spend time with friends and family and is a great joy. Our youngest Daniel was born in 2010 in Oregon. He has brought so much laughter to our family. He is very intelligent and loves to learn.

Tell us about your ministry work before you came to Norway.
My wife and I have been in pastoral ministry our entire married lives. We have been in youth ministry, college and career ministry, pulpit pastors, traveling preachers and have pastored 2 churches in Oregon.

Before we came to Norway, we spent the last 15 years as pastors of a wonderful church outside of Portland. We saw God do many incredible things in our time there, truly demonstrating that God delights to use the weak things of the world. Many came to faith, many grew in their faith. The church became debt free. People were called to ministry and missions.

How did God lead you to Norway and specifically Skien?
While pastoring in Oregon, I went to our yearly pastors’ conference for the Assemblies of God. One of the speakers made a passionate plea to consider missions and invited people to come forward if they were willing. I went forward as a way to express to God my willingness to be where ever He might lead. While at the altar I was overcome by the presence of the Lord. I could not stop weeping. I felt the Lord speak to my heart and tell me I was to plant a church in Norway.

The following day was a Wednesday and I was back in the church I was pastoring. The worship team was about to start practice for the midweek service and one of the worship team members, who had no knowledge of how God was speaking to me, asked me what the spiritual climate was like in Norway and if I could ever imagine living there. Then on Sunday of that same week a man in our church, out of the blue, brought me a T-shirt with a Norwegian flag on it for one of my boys.

When I contacted our Assemblies of God Northern European Director about missions in Norway, he told me that the timing of my email was quite interesting in that he had 2 key phone calls that very week with Norwegian church leaders. He discovered that the very thing that the Norwegian leaders said they needed was the very thing we were called to do, namely plant an English speaking International Church.

We ended up in Skien in the beginning because of practical reasons. This is where my wife is from and we had connections here. After spending time here and praying, we have realized just how strategic Skien is. We felt the Lord wanted us to plant a church here.

What do you think are Norway’s greatest needs?
Norway’s greatest need is Christ. While Norway is a very rich country, is it spiritually dry. What good is it to gain the world and forfeit your soul? While some statistics may claim that Norway is a Christian nation, a very small percentage actually attend church or have a truly Biblical Christianity.

Tell us about the church: describe the people that you want to attract in terms of nationality, age, expats, military, etc.
We have already had 17 or more nations represented in the church so far in just the first 3 months. The church has had a variety of different ages attend. We have also had a lot of young people from a local YWAM base in the city come. Our desire is to be a church for those who speak English and are looking for a Biblically faithful, Christ exalting place to worship, grow and serve in. We also have a huge desire to reach people for Christ and recently saw our first response to follow Christ.

What do you feel are the advantages of being an international church in your city?
Our city has a lot of internationals in it. English is a language that many internationals speak. Norwegian takes time to learn, and so having an English speaking church is really needed.

How can fellow FEIC member pastors pray for you guys?
We are so thankful for prayers warriors. A few key things that we can use prayer for our, a bigger location that is central in the city. A few more strong core team to help in the work. We ask for prayer for souls to be saved and people to deepen their commitment in following Christ.