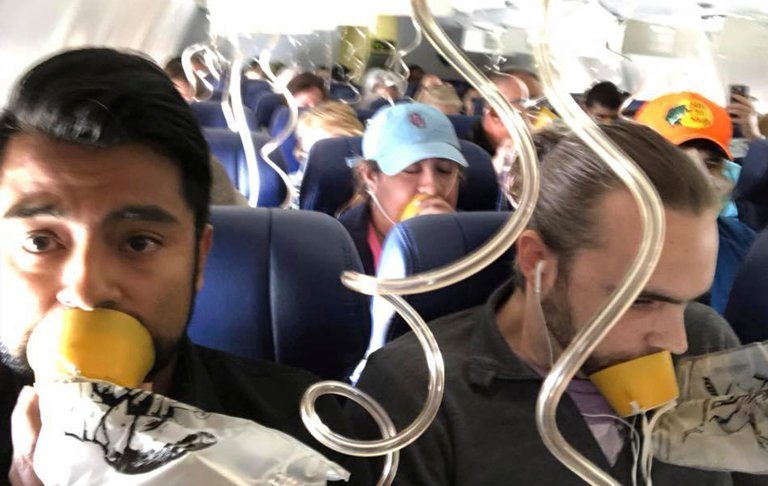 How many times have we heard the same “pre-flight” instructions of how to respond in case their is an emergency? You know, the one where the stewards demonstrate what to do in case the airplane loses cabin pressure?

Two weeks ago, Southwest Airlines flight #1380 had an engine fail during the flight and was forced to make an emergency landing. A female passenger was killed and others were injured when a piece of shrapnel from the engine broke through a window.

At that moment, the cabin lost pressure and the oxygen masks dropped from the ceiling just like everyone had been told they would.

The irony is the guy in this picture who is taking a selfie and those around him did not follow the instructions and use the mask properly! What instructions? The same ones we all hear every flight before takeoff:

“In the event that there is a loss of cabin pressure, oxygen masks will drop automatically. Place the oxygen mask over your mouth and nose the breathe normally!

They only covered their mouths and not their noses. So, what does this selfie teach us:

2. It’s just not relevant for my life in this moment. Information can become common place until it’s not.

I’ll never forget when our middle son came home from a youth event and told me how God really used a leader to speak a word from God into his life. When I asked him what the leader told him, he responded, “Dad, he was praying for me then told me “God has a great plan for my life.”” Melinda and I had told him the same thing a thousand times growing up but when the moment was right, it was a life revelation.

3. It will never happen to me. Flying has become so normal for us that the truth is none of us fully listen to the safety speeches. Part of the reason is we just don’t believe the flight we are on will ever experience something like that. It happens to others but it doesn’t happen to me.

I encourage you to take a moment and think about these realities. Especially think about the way we communicate the Gospel in light of these challenges and ask God to help us to share a Word from heaven this week that is both relevant and personal.

We’re praying for you and your gathering this weekend!